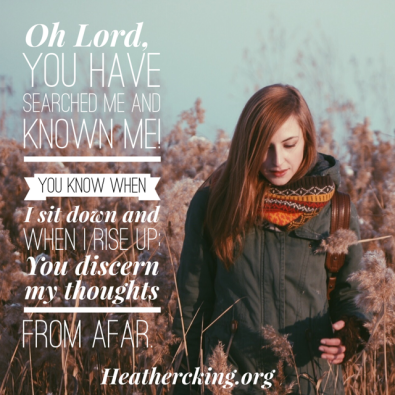 My daughter tried a stealth move.

I set my cup down on the floor next to the sofa where I was sitting.

She crawled over and paused.

Out of the corner of my eye, I saw her glance my way without fully turning her head, just flitting her eyes up to see if I was watching.

The she made her move.  She swooped down, sucked on the straw and gulped down my drink.

She grimaced.  Her whole body bounced back as she crawled to the other side of the room with a combination look of utter confusion and a little disgust.

She didn’t know I’ve been drinking green tea instead of Cherry Coke recently.

“Didn’t expect that, did ya?” I teased her and she laughs because she knows she deserved that little shock to her palate.

Since then, she’s been asking me, “Mom is that water in your cup or is it the other stuff?”

She was surprised by what she found in my tumbler that day, and she doesn’t want it to happen again.

Her little encounter with my green tea has me thinking:

Others might be surprised by what’s within us sometimes.

We might be surprised by what’s within us sometimes, too.

We think we’ll find fresh water, and it’s something gross instead.

We think it’ll be a delight, and instead it’s disgust.

Not God, though.  God is never surprised by what He finds within our hearts and lives.

O Lord, you have searched me and known me!  (ESV).

Some part of me wants to hide from that.

God, please don’t see the worst in me.

I don’t want Him to see the mixed motives or the idolatry, the way I fight with perfectionism and feeling not-enough.

I don’t want Him to see me lose my temper or get annoyed or feel like giving up.

I want to bury that jealousy or coveting and hope he doesn’t notice the bump in my backyard.

I want to cover over the mistakes and mess-ups or fatigue or worry, the bad moments and the bad days.

If God sees my worst, surely He’ll give up on me.  He’ll use someone better, call someone purer, bless someone holier, because I’m such a broken vessel.

Then I think of Nathanael.

When Jesus called out to Peter, James, John and Andrew, they were hauling nets along the sea, just another day of work.  He said, “Follow me,” and they dropped the fishing gear and stepped into discipleship.

Jesus called Matthew and immediately the tax collector hopped up from his papers and pencils and followed.

It’s such a beautiful calling.  It’s the calling of the willing and the obedient, the receptive and ready.

When Philip saw Nathanael that day, he told his friend all about how they had found the Messiah, Jesus of Nazareth.

Nathaniel mocked the thought.  It was a joke, surely.  He asked:

“Can anything good come out of Nazareth?” John 1:46 ESV

It wasn’t a beautiful moment of faith or instant belief.  He didn’t seem receptive or ready.  He was doubtful and disdainful.

Then Jesus came along, saw Nathanael and said:

“Behold, an Israelite indeed, in whom there is no deceit!” 48 Nathanael said to him, “How do you know me?” Jesus answered him, “Before Philip called you, when you were under the fig tree, I saw you.” 49 Nathanael answered him, “Rabbi, you are the Son of God! You are the King of Israel!” (John 1:47-49 ESV).

How do you know me?

Then, realizing that Jesus did in fact see into his very heart, Nathanael confessed faith.  He worshiped.

He followed Christ and became one of the 12 disciples of Jesus.

Even now, the Armenian church claims Nathanael as their founder.  Church tradition says he preached as far as India and was martyred there.

He became sold out for Jesus.

But here’s what I love.

Jesus knew everything about him right from the beginning, the skeptical side, his mocking jest with Philip, and still called him and commissioned him.

There are days when I’m surprised myself at the sin still clogging up my heart.

And then that shame ensnares me.  I think I need to clean myself up and fix myself and get to work on my sin problem before God could bless any offering I bring.

But that’s not what God says.

That’s not what Jesus does.

Jesus bids us come and follow here and now, just as we are, not as we ought to be.

He loves me now, the imperfect me, the me that wants to be like Jesus but isn’t there yet.

Jesus doesn’t know you and reject you or set you aside.

And He loves you.

And He calls you.

5 thoughts on “For the times you want to hide”