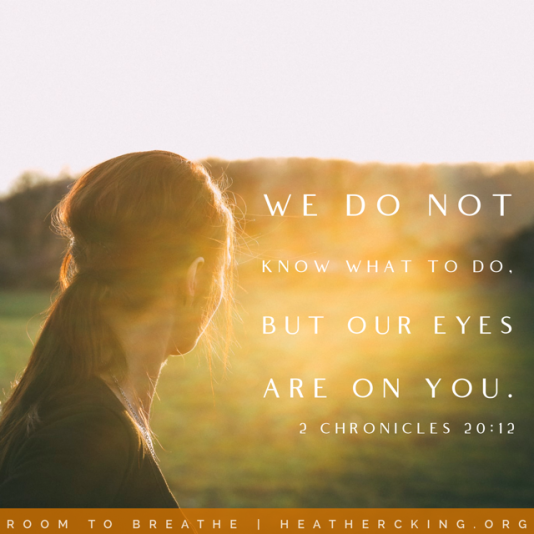 On band banquet night, instead of being with the band or being at a banquet, I rushed home from another meeting to pull up YouTube and watch on my laptop while I folded laundry in my living room.

My daughter’s band director wore his normal suit and tie while announcing well-deserved awards and identifying next year’s leaders, keeping as many things normal for them as he possibly could.

Then he said the oh-so-familiar words:

I don’t know what marching band season will look like next year or if we’ll even have one, but the best thing we can do is to prepare as if  it will be a normal year.

I’m  a choral director and I’m in the middle  of planning Christmas music, but everything I say begins like this:  I don’t know what it will be like, but….

I’m a mom with four kids who are all anxious about the fall.  Two of my children are leveling up to new schools they’ve never attended before, so that’s extra-new and extra-anxiety-producing for them.  They ask me about schedules and classes and extracurricular activities and I have to say it every single day right now:  I don’t know how it will be next year….

I’m a church leader trying to minister and plan who just keeps saying the same thing at meetings, “I don’t know whether this will work or not, but….”

It’s been a deeply humbling season of uncertainty and dependency.  I can’t know so I can’t plan and I can’t rely on those plans.

It’s every week and every day waking up to  handle just this moment, this need, this task ,this decision, this day’s reality, and then being content at the end of the day with just making it through today and moving on to tomorrow.

The truth is, if I think too much about a month from now or three months from now, I’m overcome—just washed over by a wave of anxiety in an ocean of panic and sorrow about all the loss and all the change.

Stormie O’Martian wrote a book called Just Enough Light for the Step I’m On and I’ve been thinking about that step-by-step life of trust. I have to lean into Jesus so I can see the step He’s lighting for me.   No rushing ahead or stumbling ahead or falling dangerously ahead of the light He gives.

In 2 Chronicles 20, King Jehoshaphat faced a multitude of armies threatening his kingdom all at once.   He didn’t have just one enemy to fight.  The Moabites and the Edomites and the Meunites had all gathered for battle against him.

Of course, he was afraid. God knows it’s so easy for us to all be afraid of these enemies amassing against us.

He didn’t cower, though, nor did he rush in to save the day with his own strength, with battle strategies or soldier recruitment plans, or the counsel of his generals.

Then Jehoshaphat was afraid and set his face to seek the Lord, and proclaimed a fast throughout all Judah.  And Judah assembled to seek help from the Lord; from all the cities of Judah they came to seek the Lord (2 Chronicles 20:3-4).

He prayed.  He fasted.  He asked others to pray and fast with him.  He earnestly sought the Lord.

He said the very words and prayed the very prayer that I have been returning to since March:

…For we are powerless against this great horde that is coming against us. We do not know what to do, but our eyes are on you.” 2 Chronicles 20:12 ESV

I truly am so powerless in this.  I am not in charge of what school will look like in the fall or the rule about gatherings or whether there is meat and toilet paper in the store on the day I happen to shop.

We are powerless and we do not know what to do, Lord, but our eyes are on you.

My eyes keep wanting to shift their focus.  They are wayward.  I look at the problems, at the world, at the news, at the numbers, at the Governor’s announcements, and at the Facebook and Instagram drama.

Fix my eyes, my heart, my mind on you alone, Jesus.   In the moments when I do not know what to do (and there are so many, Lord), help me look to you and you alone.

One thought on “I do not know”