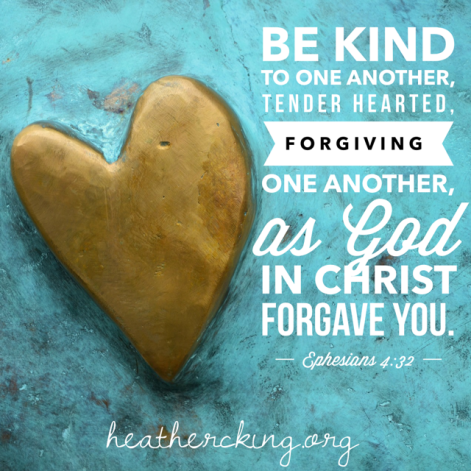 Years ago, my friend was crying and telling me she felt like a total flake.  Life had been crazy, filled with mistakes and missed appointments, misplaced papers, forgotten promises, everything lost and mixed up and wrong.

I love my friend and I got it. Truly, I did.  I nodded my head and encouraged her while other shoppers pushed their carts past us in the grocery story.

But inside, in the secret places of my mind and heart, that compassion wasn’t complete.  It was a hollow, pat-her-on-the-back kind of friendship that feels bad, but doesn’t really offer the full covering of grace.

The truth was, deep down, I was judging her as much as she judged herself.  And it was ugly.

Forgetting, missing, losing, making mistakes? It sounded like a too-busy schedule and an absent organizational system.  Maybe a few files and a day planner could save the day.

Two weeks later, I was sobbing at my kitchen table.  It had been a week of misplaced papers and missing items—not little insignificant things—BIG things, like legal documents and DMV paperwork.

For someone generally in control and on top of things, the week had been devastatingly humbling.

Then, I felt the deeper challenge.

God never lets me get away with passing silent judgment or criticism on another.  Never.

The very moment I start internally critiquing another mom or putting another friend in a labeled box based on her mistakes and weaknesses, I know God will be at work in my life, bringing me to my knees to ask for forgiveness.

Because I need a Savior.

Because I’m a mess, too!

I’M NOT PERFECT AND MY LIFE ISN’T PERFECT AND THE THING WE ALL NEED AS MOMS AND AS WOMEN AND AS FLAW-FILLED HUMANS IS HEAPING LOADS OF GRACE AND COMPASSION, NOT QUIET JUDGMENT OR SILENT CRITICISM.

We stumble into the judge’s seat so easily, thinking we know the people around us:

The frazzled-looking momma with the crying baby in Wal-Mart.
The parents whose teenager disappeared from church.
The couple who met with the divorce lawyers last week.
The husband and wife holding the bankruptcy paperwork.
The family with the nice new car and large house.
Those who homeschool (or don’t).
Those who have large families (or small).
The mom who commutes every day to work (and the one who doesn’t.)

As long as we’re quiet about it, after all, there seems little harm.

Maybe it spills over occasionally into snarky remarks and private jibes with like-minded friends, but mostly we control the collateral damage.

Yet, isn’t that the picture of the pharisees in Luke 5?

Scripture tells us: “One day Jesus was teaching and Pharisees and teachers of the law were sitting there” (Luke 5:17).

They had front row seats, a privileged view of the hurting crowd.

They watched four friends carrying a man on a mat and lowering him down through the ceiling.  They watched as Jesus healed him, saying, “Friend, your sins are forgiven” (Luke 5:20).

While the man and his friends rejoiced and the crowd marveled, others remained unmoved:

The Pharisees and the teachers of the law began thinking to themselves, “Who is this fellow who speaks blasphemy? Who can forgive sins but God alone?” (Luke 5:21).

They were just “thinking to themselves.”  They weren’t gossiping or heckling Jesus.  They didn’t hop up then and there to condemn Him.

It was just an internal dialogue, a private moment of judgment and condemnation.

But, “Jesus knew what they were thinking and asked, ‘Why are you thinking these things in your hearts?‘” (Luke 5:22).

Even our most secretive judgments of others have an audience—Jesus Himself.

Would He also be disappointed about what I’m thinking in my heart?

After all, judgment that doesn’t appear on protest signs or Facebook posts or Twitter feeds is still judgment and it still hurts.

INSTEAD OF CRITICIZING OR LABELING OTHERS WHEN I SEE THEM STRUGGLING OR HURTING, I SHOULD BE DRAWN TO INTENSE AND CONSISTENT INTERCESSION, PRAYING FOR THEM RATHER THAN PICKING AT THEM.

‘God never gives us discernment in order that we may criticize, but that we may intercede.’

I SHOULD BE SLOW TO CONDEMN AND QUICK TO PRAY FOR OTHERS.

The truth is I’m desperately in need of the grace Christ has poured out on me, and if I need that kind of grace, then I need to show that kind of grace: unhindered, unqualified, unmarred by an undercurrent of criticism and condescension.

(Author’s note: Of course, this doesn’t mean we can’t discern or judge right from wrong, sin from not-sin, etc.)

5 thoughts on “Slow to Criticize and Quick to Pray”