This week, I’m having to do some things I don’t want to do.

Eventually, you have to just go to the dentist or get the flu shots for your kids.  No more procrastinating.

You need to make that phone call…have that tough conversation…ask someone for help.

When we’re obeying God and following Him “Anywhere” He calls us to go, it’s sometimes exhilarating. Other days, obedience can be difficult, messy, frightening and overwhelming.

This week, as I do some of the hard things, I consider how Queen Esther did what she didn’t want to do.

When her cousin, Mordecai, asked her to speak to the pagan King about preventing the genocide of the Jewish people, she wrote back to him:

All the king’s servants and the people of the king’s provinces know that if any man or woman goes to the king inside the inner court without being called, there is but one law—to be put to death, except the one to whom the king holds out the golden scepter so that he may live. But as for me, I have not been called to come in to the king these thirty days (Esther 4:11).

Still, instead of hiding away in fear, putting off the task, or running away from God (all of which I’m tempted to do at times), Esther chose the hard obedience.

Here’s what we can learn from her:

Pray and ask others to pray

Esther asked the Jews in Persia to fast and pray for her before she finally went before the king.

Her story isn’t one of a lone heroine rising to face an enemy. She … depended on the intercession of her people.  #AnywhereFaith

I pray some specific things when I know God is asking me to do something I don’t want to do:

Like Esther, I also sometimes make myself vulnerable and share my request with someone else. Just knowing I’m not alone helps me move forward.

Esther set a deadline—fast and pray for three days and then she’d go before the king (Esther 4:16).

Deadlines can work for us, too. We can pray and think about it forever, but in the end, it’s time to just get the job done.

After the three-day fast ended, Esther walked into the throne room uninvited and faced the king on behalf of her people.

Leave the results in God’s hands

One of the hardest parts of my calling is asking.  I send out proposals and ask publishers if they’re interested.  I ask businesses about book signings.  I ask for input on my book from others. I  ask people to join my launch team.  I ask radio stations if I can come on the air.

I have to ask.  It’s part of being an author, but it’s the hardest part for me because I fear rejection. What if others say, “no?”

I’m learning, though, to leave the results up to God.

Esther made a famous declaration when she finally decided to go before the king, saying, “If I perish, I perish” (Esther 4:16).

These are words of submission to God’s big plan.

Whatever happens, no matter what the outcome, I’ve done what God wants me to do and He’s in control.

Sometimes I ask myself, “What’s the worst thing that could happen here?” And then I remember that any “worst thing” I face is still in God’s hands.

Success doesn’t depend on me, nor was it up to Esther to change public policy or the heart of the king.

Ultimately, we can walk in obedience and trust God with the outcome.  Even if the worst happens, He will carry us through.

When Esther obeyed, God saved her people.  As a result, the Jews celebrated, and they are still celebrating the Feast of Purim with “feasting and gladness” to this day! (Esther 9:22 ESV).

In a much smaller way, I celebrate even the smallest acts of obedience, too.

When I’ve made the phone call I didn’t want to make, talked to the person I was afraid to talk to, stood up for something when I was afraid to speak, or submitted a proposal when I feared rejection, I usually treat myself.

It’s not big or expensive. For me, it might be a a hot cup of tea or a piece of dark chocolate, maybe a morning off from normal work in order to rest and read.

Maybe your treat is a Starbucks coffee or a new book.

It’s not about going big; it’s about rejoicing over obedience and celebrating what God has done in us!

Want to learn more about Esther’s fears and how God helps us go “Anywhere” with Him, even when we’re terrified?  My new book, Anywhere Faith, is available now. 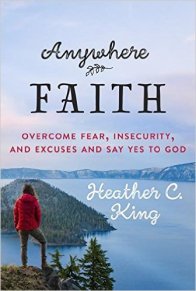