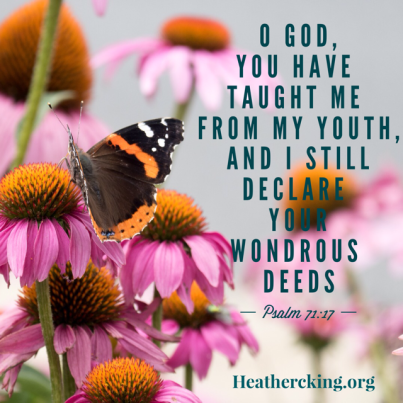 Every spring for the past five years or so, we’ve watched caterpillars climb to the top of a tiny cup, flip themselves upside down, spin a chrysalis, and emerge a week later as butterflies.

This year, though, my daughters suggested doing something different.

After all, we’re old hands at this metamorphosis thing.

How about something new?

What if we ordered a frog kit instead?  The company sends us a tadpole. We watch it become a frog and then we release it in a local pond.  Perfect!

So, I started researching frog kits and we were all excited until I read the comments.  These frogs live for 20-30 years.

I wasn’t sure I wanted such a long-term commitment.  My children should be off living adult lives by then and I’d still be home tending to our everlasting frog.

And we couldn’t release this frog to any old outdoor body of water either.  The frogs in the kit aren’t native to our area, and that could devastate the local wildlife population.

So, we decided that unless we found a local tadpole who we could raise to become a local frog, we’d stick to caterpillars in a cup.

Those caterpillars arrived and my son watched their centimeter long bodies creep around the plastic.

He learned how to say ‘caterpillar’ and he said it over and over and over, pointing at them to make sure I’d seen them and knew they were in our house sitting on our fireplace mantle.

And then each caterpillar spun into a chrysalis and my son learned a new word and made more grand announcements.

“Caterpillar go up.  Sleeping in chrysalis.”

Who knew an unmoving chrysalis could be so entertaining?  He’d watch the cup just as happily as if the caterpillars were still crawling around in there.

Then the most exciting day came.  We peeked into the bug carrier and saw our first butterfly, completely still, waiting for his wings to dry.

As more butterflies emerged, they began fluttering around and hopping onto the flowers we’d left for them.

And my son giggled.  He just laughed and laughed at the sight.

In all our planning and thinking that maybe the butterfly thing was old-news and maybe we should try something different, I’d forgotten that even though we’d seen the butterflies transform year after year, he hadn’t.

For my son, this was newfound joy.  This was childlike wonder and living amazed at the beauty of new life.

In Luke 5, I read about the disciples limping onto shore after a long and unsuccessful night of fishing.

Yet, Jesus sends them back out.  He tells them to set down those same nets into that same water.

Simon Peter protests at first but chooses to obey.  They take the boat out.  They put down the nets yet again.

And they haul in the catch of all catches.

Their nets broke with the weight of the fish.  They yelled for partners to join them out on the water to haul in the load faster.

…he (Peter) and all those with him were amazed at the catch of fish they took  (Luke 5:9 HCSB).

They were amazed.  They were flabbergasted and overwhelmed by awe.  They were made breathless by the wonder.

I bet they were pulling with all their might, load after load, like the fish just wouldn’t stop coming, and they must have been breathless and laughing in astonishment.

They’d yanked nets of fish into their boats many times before.  This was different.  This was God-at-work.

Years from then, those disciples would see the lame dance, the blind see, the deaf hear, food multiplied to feed a crowd, and their crucified Savior resurrected.

But right at this moment, they marveled at a boat weighed down with fish.

I pause and ask for this:

Lord, help me be amazed. Like my son standing on a kitchen stool so he can watch butterflies bounce around their home…..like the disciples exclaiming over an inexplicable abundance of fish….let me rejoice in you.

Help me to see afresh.  Help me to consider anew.  Fill me with such childlike joy in the Good News that I can’t help but share it over and over and over.

3 thoughts on “When Wonder Never Ceases”