Me and my girls freak out about bugs. 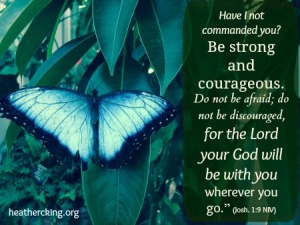 We grab for a dry towel when water splashes into our eyes.

We talk through all possibilities and potential scenarios so we won’t freak about what’s new and different.

We inch into doorways when there’s a room full of new people.

Me and these three daughters of mine, we’re not adventurers or discoverers, explorers or conquerors.  We’re not risk-takers or rock-the-boaters.  We’re not the movers or the shakers.

No, we’re planners and organizers.  We’re the faithful and the hard-working and the folks dipping their toes in all gentle and nervous on the side of the pool to test the waters before jumping in.

I’ve been spending all these years of motherhood encouraging my daughters to have courage.

It’s okay to make mistakes, so just give it a try.

God is with you, so don’t fear.  Just relax and trust Him.

I tell it to them and maybe along the way I’m preaching to myself.

So, there we were at the amusement park this week for the last hurrah of summer break. And this daughter of mine, the one who screeches the loudest of all about spiders, announces she wants to ride her first big roller coaster.

Oh, yes, the real roller coaster, not the one with a Sesame Street character on the front in the clearly marked kiddie zone.

I balk at her request.  Is she sure?  Really sure?

Oh yes.  Her friends all ride this roller coaster and she has her heart set on it.  Today is the day.  She’s going to do it.

I poll the family.  Anyone else?

No one else feels the need for speed today.

So, we visit all the normal rides and enjoy all the usual adventure and it’s just about time to go.

She pouts.  She really wanted to give it a try and now she’d have to wait another year.

I decide right there that if this child feels the urge to be brave and say yes to what frightens her, then there was no way were leaving without her riding that ride.

Dad took her one way while I took the other non-roller-coaster riders another way.  This was her big moment.

Forty minutes or so later, we meet up again and I throw up my hands in a big question:  “So, how’d it go?”
She didn’t ride.

Dad says it simple.  She looked up at how high it went, down at how low it dropped, and wrinkled up her nose.  Maybe she really didn’t want to ride that ride after all.

Maybe doing it just ’cause all her friends can do it wouldn’t be so fun for her.

Maybe she just needed to wait a bit longer.

I was proud of her for stepping up there and looking over that beast of a ride and then making the tough choice to be wise and true to herself.

I’ve spent a whole month this summer learning to say, “No.”  I’ve learned that bravery doesn’t look the same for everybody.

You stepping out in faith and saying “yes” when God calls, that’s brave.

Or me doing it just because you want me to or ask me to…or maybe because society tells me I need to or because I don’t want to upset anyone by saying, ‘no’?

That’s being a coward in a brave costume.  It’s choosing to give in instead of stand up and say the hardest thing:  No, thanks.

That young shepherd-warrior David stood in front of the Mighty King Saul and tried on the king’s very own armor (1 Samuel 17).

The King’s protective gear swallowed the teenage boy up. It was hanging off him, clanging and heavy.

It didn’t fit David at all.

That had to take courage, to tell a king, ‘No’ instead of just follow blindly and obediently.

I guess the truth is it takes bravery to do what you know is right, whether that’s saying, ‘Yes’ or saying ‘No.” Courage is knowing what God wants you to do and doing it no matter what.

In Let’s All Be Brave, Annie Downs says, ‘The road to courage is lit by God’s wisdom.”

During this year-long pursuit of God’s presence, I’ve spent this month learning to say, “No.” That meant seeking His wisdom and His opinion over everyone else’s and shaking off the people-pleasing and the cowardice.

To read more about this 12-month journey of pursuing the presence of Christ, you can follow the links below!  Won’t you join me this month as I ‘Learn to Say, ‘No?’