Her Other Mom cooks yummy pancakes.

Her Other Mom bought all of her clothes (although I clearly remember shopping myself). 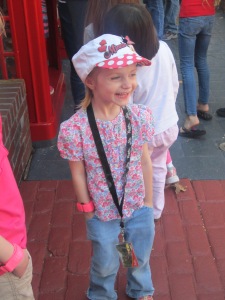 Her Other Mom has a big house with a pink toilet in it.

Her Other Mom owns a dog.

Her Other Mom tells her when to eat, when she can have a snack, when she can go outside to play, what shows to watch on television, and whether or not it’s bedtime.

Her Other Mom has that book, that Kindle app, that game, that movie, and every toy that’s ever been advertised on television…ever.

We’re not exactly sure when it happened or how, but at some point my three-year-old transitioned from a mini-van full of fairly typical imaginary friends to an imaginary “Other Mom.”

Eventually the Other Mom had an Other Dad and Other Sisters and even Brothers, and she chats about this entire Other Family all day long.

We laugh most of the time (quietly to ourselves, of course) and let her chatter on about this pretend family.

Once I mistakenly corrected her, reminding her at dinner that it wasn’t the cape-wearing superhero Other Mom who gave her a birthday gift, but it was in fact me.

So, I mostly leave it be and certainly don’t use the words “pretend” or “imaginary,” “not real” or “fake” whenever she launches into one of her Other Mom fairy tales.

But the other day, I leaned in close to my little one and whispered, “Who loves you?”

Without a second’s breath, she blurted out “My Other Mo……” and then she stopped.  She put down the crayon she was coloring with and let it roll on the table, concentrating on my question.  She pushed back the flyaway hairs escaping from her ponytail.

Then she looked right into my eyes and said, “You!” and giggled at me like we had just shared the best knock-knock joke ever heard by a preschooler.

“And who else loves you?” I asked her, pressing in on the moment.

“My cats….and Lauren and Victoria and my Dad.”

Not her Other Dad, not those Other Sisters, or the Brothers or the imaginary dog…

We love her, this real family who takes care of her real needs and buys her real clothes and cooks her real food.

It’s innocent, of course, this imagination of hers.  Most days, I try to marvel at it rather than question too much whether deficiencies in me gave her reason to create an Other Mom (I don’t, after all, have a pink toilet in my home).

But then there’s God and then there’s us and it really isn’t innocent much of the time, forgetful, yes…apathetic at times…generally oblivious in some moments.

Like Israel just a short hike from Egypt, not long enough for a generation to develop spiritual amnesia about their miraculous deliverance out of slavery, still they were forgetful beings.  Moses delayed on the mountain with the Lord, so Aaron threw some gold into the fire and pulled out a golden cow.

The people looked at that man-made object and declared, “Israel, this is your God, who brought you up from the land of Egypt!” (Exodus 32:4).

And they did it again generations later.  King Jeroboam decided it was too difficult for the people to trek to Jerusalem to worship in the temple.  It required too much sacrifice, too much effort.

So, “he made two golden calves, and he said to the people, ‘Going to Jerusalem is too difficult for you. Israel, here is your God who brought you out of the land of Egypt.'” (1 Kings 12:28).

How could they give any fake god or false idol the credit for miraculous salvation?

How could worship be so fickle?

How could they forget who God is and what He had done?

We’re not three-year-olds with active imaginations.  We’re His children who forget to thank Him, forget to worship Him, forget to give Him glory for what He’s done, forget today what miracle He did for us yesterday, forget to look for Him in the middle of our everyday lives.

We too often just accept the gifts without pausing to see, really see, the way they drip with grace.

But God reminded His people: “I am the Lord your God, who brought your out of the land of Egypt, out of the place of slavery” (Exodus 20:2).

Yes, He is God and God alone.