Last night I watched the opening ceremonies for the Olympics for the first time in my life. 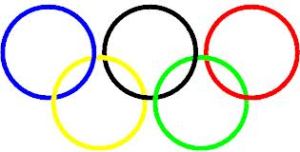 We let our daughters stay up a little later than normal and watched the London extravaganza as a family, which meant I watched for two minutes and then explained for a few seconds what was happening on the TV screen.

We didn’t need network commentators.  We had our own running commentary/question and answer time right in our living room.

When I first mentioned the Olympics to my older daughter she declared without a second’s pause, “I want to be in the Olympics!” as if it’s little more than signing up for a relay race at a Fourth of July picnic.  I tried explaining repeatedly that these are the best athletes in the world, but I still don’t think she fully understands.

So we had the same conversation we had when she announced that the girl who got many lead roles in community theater productions was “lucky.”

Yes, there’s talent, but not really luck.  Mostly there’s hard work, discipline, training, starting small and reaching goals and then setting new goals.  It involves daily sacrifices of what you’d rather be doing, what everyone else is doing, what is more fun and seems temporarily more satisfying.

Sometimes we similarly assume that someone with a deeper relationship with God is “lucky.”  She’s not as busy as we are.  She doesn’t like TV as much or is more of a reader naturally so Bible study isn’t such hard work.  Her life isn’t as crazy and stressful.

Wherever you have depth of Bible study and prayer and intimacy with God, you have discipline and sacrifice, yes daily sacrifice for the sake of what matters eternally.

Here’s a Scripture verse to meditate on all this week, reminding us that while physical feats of strength and skill at the Olympics are laudable, we are all told to train for godliness.

“Have nothing to do with irreverent, silly myths. Rather train yourself for godliness; for while bodily training is of some value, godliness is of value in every way, as it holds promise for the present life and also for the life to come”
(1 Timothy 4:7-8)

Heather King is a wife, mom, Bible Study teacher, writer for www.myfrienddebbie.com and worship leader. Most importantly, she is a Christ follower with a desire to help others apply the Bible to everyday life with all its mess, noise, and busyness. To read more devotionals by Heather King, click here.