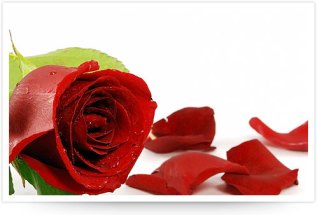 A few months ago, my husband came home, arms full of roses—deep red, fragrance so rich.  They were the most beautiful flowers I’d ever been given.

This bouquet from my husband greeted me throughout the day for two weeks, perfect in their vase.  I’d stop my chores and my rushing to literally stop and smell the roses.  But, of course then came wilting and fading and falling petals.  As a girl, I had collected up rose petals over time and filled a glass cup with them, like homemade potpourri with scents of summer and memories dear.  So, I once again gathered up the petals to keep them as a reminder of my gift.

Last week, I peeked into my jar of keepsake roses to enjoy them just for a moment and instead of dried and faded flowers still filled with aroma, I found instead mold grown over.  Into the trash they went.

Sometimes there are things we hold onto so dearly that are truly dead.  We try and try to revive and preserve; we linger over things past.  Have you held onto the habits and comforts of the past when Christ has called you to lay them down and move on?  He has asked you to sacrifice and instead you clutch it to your chest, not willing to give it up.  So, you cling to the old and fail to receive the new.  “Therefore, if anyone is in Christ, the new creation has come: The old has gone, the new is here! ” (2 Corinthians 5:17, NIV).

At the tomb on the morning of Christ’s resurrection, women brought spices for anointing.  Instead of the expected, they faced the unexpected—the stone rolled away, the body gone, two angels in clothes gleaming like lightning, asking a question: “Why do you look for the living among the dead?  He is not here, He has risen” (Luke 24:5)

Why do you look for the living among the dead?

Surely there are times we do this, too.  We look for our Living Savior among the graves.  Sometimes our faith is more cemetery than empty tomb.

We read the Bible as a historical document rather than as a living Word. We follow Jesus as our example rather than listening to Him as our living Lord.  We take our cues from our denominational traditions rather than from the Spirit of life.  In other words, we turn our faith toward dead things rather than toward the Living One. 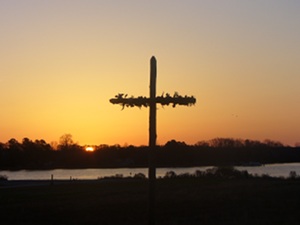 Has this been you?  Has faith been dulled and the joy of your salvation replaced by compulsory duty and passionless motions—doing Christianity rather than living with Christ?

Or, are you instead staring at a tomb of a different sort, but still there is death?  A relationship broken.  A marriage over.  A child turned prodigal.  A ministry struggling.  A passion now cold.  A vision gone dark.  A hope proved impossible.  A lack of direction and not knowing where to go.  A season of waiting, waiting, waiting, always waiting.

There is some mourning to be done, some grieving over what is lost and dead in our lives.  Some letting go and laying down.  And there may be tears; that’s expected.   Yet, “weeping may stay for the night, but rejoicing comes in the morning” (Psalm 30:5).

With morning, comes resurrection and abundant new life, and we rejoice for He is “making everything new” (Revelation 21:5, NIV).  This Savior whose sacrifice we remember on Good Friday by eating the bread, drinking the cup—this Savior declared victory over death and the grave.  Power over His tomb.  Power over the places we mourn and grieve.

What would this rising look like for us?  What can He resurrect in us this year?  Over what can He give us victory?

I pray this new life for you.

That His Word will be living and active, changing your heart, altering your perspective.
For renewed passion, vision, excitement, and ministry impact.
For restoration of relationships.
For the return of hope.
For weeping to end and joy to fill you.
For your eyes to be opened wide to God’s presence, His character, His goodness.
~Amen~