“Tinkerbell or Princesses,” I asked my daughters as we stared at the 20 different tubes of children’s toothpaste on the shelves.

“Princesses,” shouts my oldest dressed all in pink with bows in her hair.

My baby makes a grab for the Little Einsteins tube on the shelf.

I toss the plain old children’s Crest toothpaste into the cart, noting that it is $1, Tinkerbell is more than $2 and princesses tops out at a whopping almost-$4.  It’s a conspiracy really.  Princess stuff always costs more.  What in the world are we teaching these little girls of ours about materialism and money and . . . .but I digress.

Slowly I’m learning a lesson over and over every day as three little faces flash disappointed glances back at me when I buy toothpaste and when I choose a show on television.

You can’t please everyone all the time.

I want to make everybody happy so desperately.  If I could tiptoe through life with everyone always agreeing with me, that’s what I’d do.

But it’s impossible.  If you go to Wal-Mart with more than 1.5 children, you’ll likely hear the opinions of strangers on your family planning skills.

If you stay at home with your kids, you’ll probably read how you wasted all of the money spent on your education. If you dress up and head out the door every day for work, you’ll probably feel condemned by the moms wearing jeans and flip-flops and toting their kids to the library for story time on a weekday morning.

If you pull out the school books at your kitchen table for your kids each day, moms will hint at the damage you’re doing by not socializing your children enough. If you watch your child step onto a school bus each morning with her back pack and packed lunch, you’ll be reminded that you aren’t protecting your children from worldly indoctrination.

Women Warriors.  That’s what many of us become.  Mama Bears defending our choices against the criticism of others.  We get backed into corners and our claws extend.  So, we spend much of our time engaged in battles, aligning with others on our “side” and slinging weighted insults at the “enemy.”

Let’s face it.  Too much of the time, we women are cruel to other women.

And it’s worse on the Internet.  We sit anonymously behind our computers and hurl our opinions at others.  Throwing around scientific evidence, philosophical arguments, medical findings, and —-yes, even Scripture—we offer proof of why we are right and others are wrong.

So, what’s a girl to do?  How do you make the right choices for you and your family and not feel the need to defend yourself every time you sense the critical stares of random shoppers or read an article railing against the choices you have made?

For starters, we walk in the assurance of our calling.

Do What You Are Called to Do

When the teenage shepherd boy, David, stood in front of King Saul, he boldly announced that he would fight the bellowing giant even though the battle-trained fighting men were cowering in their tents. At first, Saul declared it was impossible.  A wimpy little kid was no match for the expert warrior with size on his side.

But, David prevailed and Saul agreed to let him fight Goliath, with o 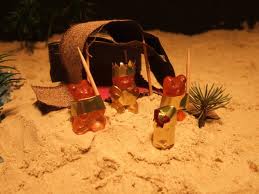 Saul thought he was helping David out.

Then Saul dressed David in his own tunic. He put a coat of armor on him and a bronze helmet on his head. David fastened on his sword over the tunic and tried walking around, because he was not used to them. (1 Samuel 17:38-39).

How often do we try to sling our own personal tunics over the shoulders of other women, assuming that all they need is our advice, our method, our choices, our plans?  We tell them (or imply) that if they want to be good wives, good moms, good Christian women, then they must do it our way and with the tools we ourselves have found useful.

But, the call God has given you is a poor fit for another woman.

In the same way, Saul’s armor confined David’s movements and made him easy prey for Goliath’s attack.

“I cannot go in these,” he said to Saul, “because I am not used to them.” So he took them off.   Then he took his staff in his hand, chose five smooth stones from the stream, put them in the pouch of his shepherd’s bag and, with his sling in his hand, approached the Philistine (1 Samuel 17:39-40).

David had the assurance of his calling.  He knew what God told him to do and how he was supposed to do it.  So, he declined to wear the armor of another and stood against Goliath bare-shouldered instead, hurling a stone in a slingshot over his head, and killing the giant as a result.  He vanquished the enemy that day because he listened to God and not anyone else, even a well-meaning, older, wiser and more experienced king.

When you feel yourself in an Incredible Hulk-like transformation, from reasonable woman to claws-extended She-Mama in defense of your life and family and personal choices, breathe deeply and ask:

Sometimes you may need to defend yourself, but there are so many times when we can choose to ignore the snide remarks and disapproving glares, because we know that we are doing what God wants us to do.  And that really should be all that matters.

3 thoughts on “Women Warriors, Part I”