I find myself saying that more and more to my kids.  I never expected that the problems of a preschooler, a first grader and a second grader would be beyond my ability to fix so much of the time.  I never imagined how much of motherhood is spent on your knees.

When you open the floor to prayer requests from kids, they’re willing to be downright honest, maybe even uncomfortably truthful at times.

If their parents fought, they’ll tell you.  If their grades are bad, if their teacher is tough, if their friend is sad, if a bully is mean, you’ll hear about it.  Children will spill it all out there.

We seem to learn privacy and shame over time, learning to keep things quiet, afraid to ask for prayer for our real problems because others might know the truth: We don’t have it all together.  People might judge.  The gossip chain will be initiated. It’s teenagers who start sharing “unspoken” prayer requests and adults that simply  remain silent when the Bible study leader says, “How can we pray?”

Until maybe the crisis is undeniable and so great we finally confess that we need prayer, desperate intercession on our behalf because the truth is—we’re broken and there’s just no hiding it anymore.

I’m saying this now to you as you sit here reading this blog, maybe munching away at your lunch or settling down to read your email messages at the end of the day, or grabbing a few minutes in between phone calls or during your toddler’s nap time….

I left church yesterday overcome with sorrow at deep hurts that I can’t fix, far beyond the stolen glue sticks and renegade classmates of my children.

And me, all by my lonesome self, can sit here at my kitchen table with my Bible and prayer journal and pray for these friends.

Scripture, however, reminds us of the power of praying together.

When Esther prepared to enter King Xerxes’s presence uninvited, placing her life in jeopardy in order to save her people from mass genocide, she didn’t just pray on her own.

She organized a nationwide prayer meeting, instructing all the Jews of Susa to “fast for me.  Do not eat or drink for three days, night or day.  My maids and I will do the same…” (Esther 4:16 NLT).

Jesus didn’t just fall to the ground in the Garden of Gethsemane alone as he waited for his betrayer to arrive with an army of soldiers and an unwelcome kiss.  He took along “Peter and Zebedee’s two sons, James and John, and he became anguished and distressed.  He told them, ‘My soul is crushed with grief to the point of death.  Stay here and keep watch with me” (Matthew 26:37-38).

Paul, who seemed so confident and capable in ministry and who always seemed content and able to rejoice despite circumstances, wasn’t afraid to ask the church in Ephesus to “pray for me, too.  Ask God to give me the right words so I can boldly explain God’s mysterious plan…” (Ephesians 6:19 NLT).

So rather than bowing my head alone, I’m asking for you to do something totally different with me.

Let’s pray together.  Would you join with me in prayer today?  I have some folks on my mind and heart.  You probably do, too.

Just leave a comment on the blog or Facebook this week saying, “I’m praying, too” or something simple like that and then spend some time this week in focused prayer for others.  It’ll take just a second of time to post that comment so we know you’re praying.

And if you have a prayer request, don’t be afraid or ashamed, please share that with us, too.  You can leave a comment here on the blog—even anonymously if you wish—and you can keep it simple, “My marriage.  My job.  My kids.”  We’ll join with you on our knees today and ask God for help.

Or, you can email a prayer request to me here: heatherking@cox.net

We’ve got to pray, friends, and not just individually, but together.  Please take just a few minutes and join in our “online prayer meeting” today.

He told me about his wife, about her kidneys not behaving, her liver calling it quits and her heart not being strong. Mostly, though, he told positive news and trends for the better.

Yet, they had dared to throw out the word ‘hospice’ in one of those foggy discussions with doctors where you’re hearing them and you’re nodding your head, but really the words don’t make sense.

On the phone, I heard how ‘hospice’ made him stumble.  He sucked in his breath, cleared his throat and told me the rest.  His brother is already there, in hospice–(there he said it again; that word never seems to come out easy)– 5-1/2 hours away.

As my grandfather talked, I though of my grandmother, spunky and life-filled, always in tennis shoes so she could speed-walk to everywhere, always talking about trips to Haw-a-ii and cruises to Alaska and more adventures.

Then I thought of her in the hospital, under 100 pounds, fragile and so easily broken.

Two irreconcilable images, surely not the same person.  And yet there it was, unreal but real.

My grandfather said, “I’m fixin’ to be an orphan here soon” and laughed a kind of nervous giggle when you make a joke that isn’t truly funny.

What to say to that?

After years of women’s ministry, I’ll tell you what never gets easy—knowing what to say when it’s all spilling out of someone and you just want to rescue and protect and bandage it all up.  But you’re powerless to do little more than hug and slip on a few Band-aids, then pray with desperate cries that God will heal in the deep-down ways we can’t.

How can there be the right words for so much that is wrong?

Maybe that’s exactly the point.  Maybe even a lover-of-words like me has to fess up that sometimes words don’t just fall short, they actually get in the way.

Like for Job, sitting heaped in ashes and wearing torn rags, scraping at the burning blisters on his flesh with broken pottery, mourning his servants, grieving his children.

When Job’s three friends, Eliphaz the Temanite, Bildad the Shuhite and Zophar the Naamathite, heard about all the troubles that had come upon him, they set out from their homes and met together by agreement to go and sympathize with him and comfort him. When they saw him from a distance, they could hardly recognize him; they began to weep aloud, and they tore their robes and sprinkled dust on their heads.  Then they sat on the ground with him for seven days and seven nights. No one said a word to him because they saw how great his suffering was (Job 2:11-13).

They spent a week in silence with Job, just sitting next to him without speaking or offering hollow words of fake comfort.  For guys who turned out to be so chatty (okay, verbose), this was a big deal!

They seemed to get this right, this friendship without words.  Just mourning with those who mourn and leaving it at that.

Unfortunately, Eliphaz finally asked the question: “But who can keep from speaking?” (Job 4:2) and that’s when it all went awry.

The moment he erupted with spiritual cliches, the “pull yourself up by your bootstraps” speeches, theological debates and judgmental accusation…that’s when he felt more impressed with his oratory skills than concerned about loving a friend.

Ezekiel, on the other hand, “came to the exiles who lived at Tel Aviv near the Kebar River.  And there, where they were living, I sat among them for seven days–deeply distressed” (Ezekiel 3:15).

For a week, the prophet crouched in the dust with the exiles from Jerusalem, those who had been carried off after years of starvation and the siege by the Babylonian empire.

And he stayed there until God told him to get up and move on (Ezekiel 3).

Sometimes we back away in fear from those in pain, not really knowing what to do.  After all, we can easily say the wrong thing.

But you really can’t mess up listening.

God brings hurting people to us not so we can fix life for them or speak some magical words that make it all better. 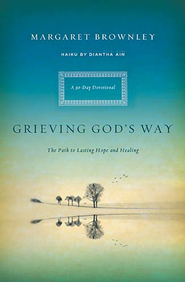 He wants us to get down in the dirt where they’ve fallen, love them, pray with them, serve them, and practice the power of presence, and so often presence without words.

May I recommend this book if you are grieving the loss of someone or ministering to another who is mourning?  It is lovely and full of practical advice and spiritual encouragement. Grieving God’s Way: The Path to Lasting Hope and Healing by Margaret Brownley