I had been wooed by the digital display and the sleek design, but I should have stuck with the tried and true older model.

The new scale promised to be scientifically accurate because of some high-quality triple sensory design. It could track the weight gain and loss of two different people by storing the weigh-in results in its memory.

So I brought it home from the store, opened the package, read the instructions, dropped it down on the floor and stepped on. Then I scowled.

According to this handy dandy super scale, I was gaining about a pound a day despite snacks of yogurt and granola, exercise sessions and water.

I could rail about the injustice of the world or blame the metabolism shifts in my 30s, but how could I argue with such a scientifically accurate device?

Finally, I carried out two scales from the cabinet: The old one with the tiny arrow that 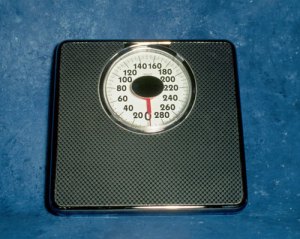 scrolled through the numbers and eventually landed on a miniature line and the new one with the flashing white numbers against a black display.

They were different.  A lot different.  I pushed the digital one around a bit and stepped on and off a few times.

I’d been using a faulty measure.

What else am I using as a faulty basis for my thoughts and emotions, my plans, my faith?

A.W. Tozer wrote: “What comes into our minds when we think about God is the most important thing about us.”

This, after all, is our foundation, our measure by which we weigh the world, and the filter through which we understand our circumstances.

But it’s not just what we think that matters, certainly not what we say.  We can confess:

But sometimes we’re really looking at the world through circumstances and emotions.  Slowly, without changing what we’re saying, we’ve still changed what we believe.

The Israelites wandering around the wilderness outside of Egypt professed belief in the God who had led them out of slavery.

When Pharaoh’s army chased them to the edge of the Red Sea, however, they complained: ”Was it because there were no graves in Egypt that you brought us to the desert to die?” (Exodus 14:11).

When they realized they could no longer shop at the Egyptian grocery stores, they whined:  “you have brought us out into this desert to starve this entire assembly to death” (Exodus 16:3).

And when the desert diet proved restrictive, they remembered: “The fish we ate in Egypt at no cost—also the cucumbers, melons, leeks, onions and garlic” (Numbers 11:5).

They said they believed in God and His miraculous power, but, as Kelly Minter writes in her study on Nehemiah:

“whenever the Israelites faced difficulty in the desert they chose to believe something false about God.  Three of the biggies were that he had abandoned them, withheld from them, or wouldn’t meet their needs” (p. 125).

It is Nehemiah’s prayer, centuries later, that reminds the people of the truth:

You did not abandon them in the wilderness
because of Your great compassion….

You did not withhold Your manna from their mouths,
and You gave them water for their thirst.

You provided for them in the wilderness 40 years
and they lacked nothing (Nehemiah 9:19-21).

But in the middle of the wilderness, with Egypt behind them and the unknown ahead, without a meal plan or a guaranteed buffet, Israel believed false things about God.

And I get that.

It’s hard to see the truth when our eyes are shut tight to the wonder of God or our bad attitude is crowding out the glory from our field of vision.

We’ve decided we’re stuck.
We’ve determined to feel unhappy.
We’ve felt cheated and gypped out of what we really want.

So we just rack up more and more circumstantial evidence, cementing what we feel.

And we believe it.  God can’t use this situation.  God abandoned me here.  God is withholding from me.  God can’t rescue, save or provide.  God doesn’t know what He’s doing.

Today, let’s pray for God’s eye-opening grace, for His perspective, for a reminder of His goodness, for revelations of truth.  Just like Nehemiah did, let’s recount the goodness of God rather than letting our dissatisfaction or hurt determine what we see and what we believe.

Heather King is a wife, mom, Bible Study teacher, writer and worship leader.  Most importantly, she is a Christ follower with a desire to help others apply the Bible to everyday life with all its mess, noise, and busyness.  Her upcoming book, Ask Me Anything, Lord: Opening Our Hearts to God’s Questions, will be released in November 2013!  To read more devotionals by Heather King, click here.