The doctor said there will be a scar.

I stood over my two-year-old as she laid on the hospital bed in the emergency room, cradling her hand in mine and gently stroking her blood-soaked hair.

More than two hours before, she had been tucked in her bed when she felt inspired to climb into the crib on her own.  We heard the thud and then her cry.  Then we heard the cries of the older girls who were certain they “saw her brains coming out” and were afraid “she was going to die.”

My husband and I scooped up my baby girl, threw on her jacket and snatched up her shoes.  Pressing a rag to her head to cover the gash and to stop the bleeding, my husband snuggled her close as he carried her to the van for our ride to the emergency room.

Sometimes when you’re in that place of adrenaline and potential bad news, fear, and love for your child, you can’t pray much more than the name of Jesus.  I’m thankful that’s enough.

In the emergency room we waited . . . and waited . . . and waited some more.  By a true miracle, my two-year-old played happily for two-and-a-half hours without one single tear, entertained only by the items I happened to have in my purse.  Two crayons.  Three miniature My Little Ponies.  Two children’s books.  A sheet of stickers.

When we saw the doctor, I confessed that I’d never had a child receive stitches for anything.  So, he cleaned out the gash in her forehead, probed it and kind of hmmmed and sighed for a few minutes.  Then he announced, “There’ll be a scar no matter what.  But in order to avoid a needle and anesthetic for her and to keep you 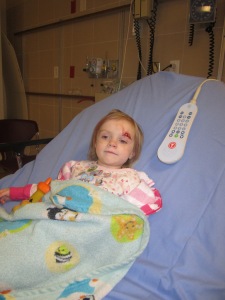 from passing out, let’s try glue instead of stitches.”

That sounded good to me.

When I told her the story, my friend said, “Who doesn’t have a scar with a story from their childhood??”

I’ve been thinking about this all week, every time I peek under the Band-Aid and examine the line of dark red across my baby’s face.  Don’t we all have scars?  Not just from childhood, but we bear the wounds of hurtful words from a supposed friend, the betrayal of someone who said they loved you, the embarrassments from long ago, and the pain over last week’s mistake.

Jesus chose, following His resurrection, to keep His scars.  He was healed and restored to life, but when He extended His hands, the palms still bore the signs of what He did for us.  This didn’t just give a basis for the disciples’ faith, but “Jesus came and stood among them and said to them, ‘Peace be with you.’ When he had said this, he showed them his hands and his side” (John 20:19-20).

His scars are our source of peace.  His hands upturned remind us that our healing, our forgiveness, our deliverance, our freedom, our redemption, our eternity are all part of the peace He gave us through His sacrifice.

“But he was pierced for our transgressions,
he was crushed for our iniquities;
the punishment that brought us peace was on him,
and by his wounds we are healed” (Isaiah 53:5). 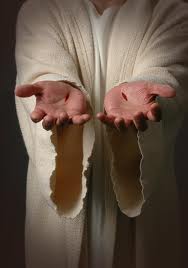 Jesus’ scars are a reminder of what He has done and that gives us peace.

Our scars can do the same.  Oh, I don’t mean we cling to burdens, shame, guilt, hurts, and fears, refusing to lay them down at the cross and remaining forever imprisoned by the stories of our past.

God forgives us.
“As far as the east is from the west, so far has he removed our transgressions from us” (Psalm 103:12).

God heals our broken hearts.
“The Spirit of the Sovereign LORD is on me, because the LORD has anointed me to proclaim good news to the poor. He has sent me to bind up the brokenhearted, to proclaim freedom for the captives and release from darkness for the prisoners” (Isaiah 61:1)

God sets us free.
“It is for freedom that Christ has set us free. Stand firm, then, and do not let yourselves be burdened again by a yoke of slavery” (Galatians 5:1)

God doesn’t hold our past against us.
“Therefore, there is now no condemnation for those who are in Christ Jesus” (Romans 8:1)

We are washed clean, made new, redeemed and set free because of the scars Christ bore on our behalf.

Yet, the experiences that He brought us through, all of the times He carried us, and the moments when we stumbled, aren’t times we completely forget.  They are, instead, seasons of transformation in our lives.  He uses each trial and mistake to change our hearts and draw us closer to Him.

The scars we bear from those times of difficulty and growth are our testimony to others.  We can point to our own scabs and gashes and say, “Look what God has done in me.  He brought me through this.”  We are walking reminders of His mercy, standing testaments to His grace, and an ever-present sign of His peace among the hurting, the broken, and the oppressed.

And it’s not despite our scars; it’s because of them.  That’s why Peter, after experiencing the pain of rejecting Christ, became the apostle who argued so passionately for humility.

That’s why Paul, knowing that he had been a murderer and a persecutor of Christians in the past, became the apostle best known for defending grace.

Their scars became part of their testimony and pointed to Christ.

Years ago, I stumbled upon what became one of my favorite songs, Point of Grace’s Heal the Wound.  I hope it blesses you as it did me!

You can click on the video from the blog in order to listen or follow the link here: http://youtu.be/KjnCxvH4Q3w

You can read more devotionals on this topic here:

5 thoughts on “There’ll Be A Scar”